Avenue of The Giants camping trip

Took an artist's retreat up to the Humboldt Redwoods State Park. Eight of us packed into two cars, with camping gear & sketchbooks, drove up 4 hours and stayed the night in a near-impossible to find campsite. We stayed at a campsite called Albee Creek which had almost no signage, and the one sign that it did have was only visible from the opposite direction we were travelling! Once we actually found the road that led to the campsite we had to drive on a skinny rough road that only looked like it had enough space for one way traffic. But it was a two way road, a pretty death trap in the redwoods. Thankfully even though the cars coming down the road the other direction were driving too fast for my taste, we got to the campsite safely. And we had a blast!


We went to the Shrine Drive Thru Tree 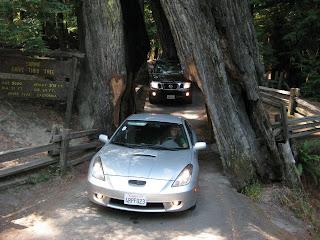 After the Shrine place we drove along the Avenue of the Giants to find a good drawing spot.